PHILADELPHIA — A Roman Catholic church official was convicted of child endangerment but acquitted of conspiracy Friday in a landmark clergy-abuse trial, making him the first U.S. church official branded a felon for covering up abuse claims. 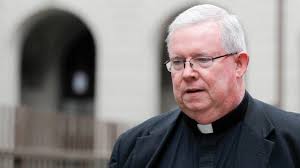 Monsignor William Lynn helped the archdiocese keep predators in ministry, and the public in the dark, by telling parishes their priests were being removed for health reasons and then sending the men to unsuspecting churches, prosecutors said.

Lynn, 61, served as secretary for clergy from 1992 to 2004, mostly under Cardinal Anthony Bevilacqua.

“Many in the Roman Catholic Archdiocese of Philadelphia hierarchy had dirty hands,” Philadelphia District Attorney Seth Williams said. “They failed to realize that the church is its people.”

Williams said he did not have sufficient evidence last year to charge other officials, including Bevilacqua, who died in January at age 88.

Lynn had faced about 10 to 20 years in prison if convicted of all three counts he faced — conspiracy and two counts of child endangerment. He was convicted of only a single endangerment count, which carries a possible 3 1/2- to seven-year prison term.

The jury could not reach a verdict for Lynn’s co-defendant, the Rev. James Brennan, who was accused of sexually abusing a 14-year-old boy in 1999.

Despite Lynn’s acquittal on the conspiracy charge, the trial exposed how deeply involved the late cardinal was in dealing with accused priests.

Bevilacqua had the final say on what to do with priests accused of abuse, transferred many of them to new parishes and dressed down anyone who complained, according to testimony. He also ordered the shredding of a 1994 list that Lynn prepared, warning that the archdiocese had three diagnosed pedophiles, a dozen confirmed predators and another 20 possible abusers in its midst.

Church lawyers turned over a surviving copy of the list days after Bevilacqua died.

Lynn didn’t react when the verdict was read, or acknowledge the siblings and other friends and relatives who have accompanied him to court for much of the three-month trial. Several of them were weeping.

The judge revoked his bail and he was taken to jail, although his lawyers plan to ask on Monday that he be granted house arrest until sentencing. No date was set, but the judge scheduled an Aug. 13 presentencing hearing.

The defense also pledged to appeal the conviction.

“He’s upset. He’s crushed. He’s in custody and he didn’t want anything else but to help kids,” defense lawyer Jeffrey M. Lindy said.

With the verdict, after 13 days of deliberations, jurors concluded that prosecutors failed to show that Lynn was part of a conspiracy to move predator priests around.

The jury, however, did find that Lynn endangered the victim of defrocked priest Edward Avery, who pleaded guilty before trial to a 1999 sexual assault.

Lynn had deemed Avery “guilty” of an earlier complaint on the 1994 list, and helped steer him into an inpatient treatment program run by the archdiocese. But Lynn knew that Avery later was sent to live in a northeast Philadelphia parish, where the altar boy was assaulted.